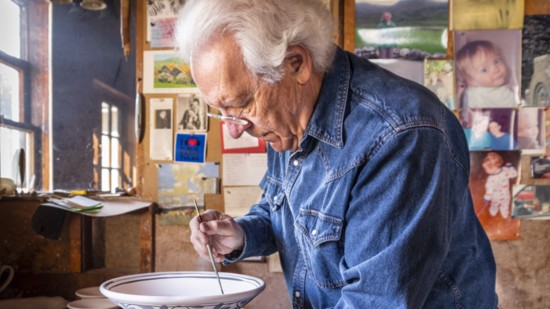 “My inspiration comes from seeing someone lovingly hold something I’ve made in their hands.”

Pottery is one of the oldest art forms, found in museums but also in mid-century modern homes and rustic farmhouses. Potter Kevin Byrne specializes in custom stoneware such as vases, trays, canisters, and an endless variety of dinnerware items including plates, bowls, platters, and coffee mugs.

Byrne’s pottery is beautiful as well as functional. He uses a warm colored clay body that he has developed over the years and glazes that are compatible with it. Deep colors, organic textures and illustrations of nature adorn his stoneware. He’s quick to mention that his collection is a creative jumping off point to designing your own custom items.

You may be tempted to display your stoneware on a shelf, but it is meant to be used and is likely to be one of the most durable items in your home. Byrne’s items are microwavable and dishwasher safe, and usually won’t bounce on a tile floor.

He says, “Stoneware is very sturdy, and if you take even decent care of it, it will last a long time. Ask an archaeologist what they find when digging up ancient civilizations and they will give you a direct answer—pottery fragments.”

Byrne creates his objects a few at a time and one kind at a time. Because these future heirloom items are individually handmade, he says it is nearly impossible to produce them in a completely uniform size. However, the chances of even your most picky party guest disparaging your dinner plates for being a smidgen different in size is quite small.

So, what drives him with boundless energy to create new items after 35 years? He says, “My inspiration comes from seeing someone lovingly hold something I’ve made in their hands.”

For information on ordering, visit KevinByrnePottery.com.

In his backyard studio made from remnants of reclaimed materials and which smells like burnt toast, is artist Ace Cuervo. That burnt toast smell is from the gas used to weld a jumble of hot metal into a curious piece of art or priceless family heirloom.

He typically spends his day in tailored suits and Italian dress shoes photographing charity events and Tulsa’s most beautiful brides.

It all began with a fundraiser. Cuervo participated in the 2012 Art Directors Club of Tulsa Block Party and was given a wooden block in which to create a silent auction item. He always wanted to learn how to weld, so he took the opportunity to create his first shadow art piece. That small project spurred him to create more, and seven years later, the hobby has turned into a creative outlet and side career.

He says, “Designing shadow art begins with a meaningful conversation. What is your passion? Where is your favorite travel spot? What is your hobby?”

He explains the process is like putting together a puzzle. As a photographer, he focuses on taking a 3-D subject and making it flat. With shadow art, he does the complete opposite by drawing with metal to create a 3-D object.

Each shadow sculpture takes 80-100 hours depending on the scale and complexity of the piece. Cuervo sells his artwork through word-of-mouth referrals. His first shadow art show is February 20 (02-20-2020) at Matters of Design Tulsa at 81st and Harvard. For information, visit Steel-Shadows.com or @steel_shadows.

“My hope is that someone would think twice about stepping on a bug.”

Being invited to artist Bob Sober’s basement to look at bugs sounds a bit creepy. But descending into his world is a magical experience that you will never want to leave. His studio is modern, bright and as neat as the pins that hold his insects to their mounts.

A retired architect, Sober dreamed of the day when he would have the time to create art. His hobby quickly evolved into a gallery of stunning portraits of the smallest among us.

The first few insects came from his own backyard but are now purchased from all around the world. Through a process called focus stacking, he uses a custom camera setup that looks more like a microscope to shoot thousands of photographs of his tiny subjects. He then digitally processes the myriad of photos together so the final product can be scaled to human-sized metal prints highlighting the insect’s intricate, breathtaking detail.

A Master Gardener for 10 years, he has seen his fair share of bugs. So, he was thrilled when in 2018, Holland Hall approached him about creating an exhibition of beetles and weevils from the order of Coleoptera for the ARTworks artist-in-residency program. It allowed him to spread his wings artistically, but also to teach students about art and entomology.

“I didn’t know I would like teaching so much. Did you know jeweled beetles are more beautiful underneath than on top? And a beetle is the most beautiful at the end of its life, right before it mates? Their bodies change daily and create an unlimited palette of colors,” says Sober. “My hope is that someone would think twice about stepping on a bug.”

Mid-America Arts Alliance (MAAA.org) is hosting his traveling exhibit, "Small Wonders: Insects in Focus" through 2023. For information, visit EUSA.org/exhibition/small-wonders/ or his website, Art's Important at ArtsImportant.com.

“The only way to get better is to fail a lot.”

Imagine a work environment with thousand-degree flames and searing hot molten glass. Surprisingly, it’s all in a day’s work for Rachel Johnston.

She manages the instructors and the hot shop, teaches classes, and coordinates the school’s outreach programs with other non-profit organizations such as Street School and Women in Recovery. She also manages the VETri program (vetri is Italian for glass) which is a free six-week program designed specifically for veterans and active duty military.

She says, “With the VETri and youth classes, we are helping them to develop coping skills. We teach them that they are going to break 80 percent of what they create in the beginning. They learn to just start over and chalk it up to learning. The only way to get better is to fail a lot.”

Johnston knows it can be frustrating to work on a piece for hours and have it shatter into a million pieces in the blink of an eye.

“You get to a point where you accept that not everything is precious. You have to allow yourself to learn and fail, and it takes a lot of practice,” she says.

Johnston has been working for the past two years on an exhibit of structural pieces. When ready, she will showcase them at the school’s art gallery. To commission a private piece, contact her at nighthawkstudios.rachel@gmail.com.

"The “Resist!” series helps keep my sanity during these polarized times."

Photographer Michael McRuiz loves the lens. But his love story with the camera begins at the end. A fine arts major at University of Tulsa, the aspiring painter took a basic darkroom photography course to complete his major and was hooked, line and sinker.

McRuiz approaches the medium from a painter's perspective with a keen awareness of the principles and elements of design. Travel and nature photography have long held his interest, but he recently dove head-first into a photojournalism project, “Resist!” which is a collection of protest photographs.

He says, “Two years ago, I had an exhibit of my “War Machine” series in which I parody our political leaders, which helped me keep my wits during the 2016 election. With the country torn apart politically, it seems like the perfect time to do this work.”

With “Resist!” McRuiz documents protest events without prejudice. Any protest-related event is fair game. He has been to gun violence protests, anti-abortion protests, Planned Parenthood protests and Trump rallies.

“Every time I show up for an event, folks think I have an agenda (I don’t), or that I work for the news media (I don’t). Often, a protest event would be rather bland unless counter-protesters show up. Then it becomes a party. I often get close to my subject, invading their personal space. That forces a reaction and results in a good photo,” he says. “Some people ignore me, some are welcoming and kind, and others harass and verbally abuse me. The abuse is unsettling, but it goes with the territory. The “Resist!” series helps keep my sanity during these polarized times.”

McRuiz plans on an exhibition of his “Resist!” series in time for the fall elections and to publish a book about them. For exhibit updates, visit Michael-McRuiz.com.